Peregrine Falcons at the Office 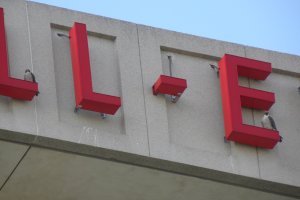 A few co-workers and I noticed these falcons hanging around our office building here in Warren, MI. I immediately knew they were peregrines after witnessing one of them pick-off a pigeon in mid-air. Peregrines are some of the fastest animals on the planet reaching speeds of almost 200 mph as they swoop down on unsuspecting prey. My admiration and respect, as a fellow birdhunter, is pretty easy to detect.

It’s becoming more common to see these awesome creatures but that wasn’t the case 20 years ago. These birds were almost extinct thanks to pesticide poisioning in the 1970’s. Abolishing the use of DDT have helped Peregrines to make a decent comeback. They traditionally nest on sheer cliff sides allowing them to ambush their prey. But in recent years, they’ve taken to nesting on sky-scrapers and feeding on the abundance of city pigeons.

After a few repeating sitings of these raptors, my co-worker Bob called the DNR. The pictures above were taken through a spotting scope by the DNR agent. I am impressed at their records on these birds. The DNR agent identified the smaller bird as a male named Zeus. He was born in Cleveland, tagged, and tracked since birth. The larger bird, female, is Nebesny. She was born in a nesting box on a bridge in Ontario. The DNR agent predicted these two will probably mate for life once Zeus is old enough to breed. 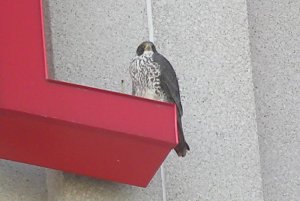 Report sitings of these awesome birdhunters to the DNR. It’ll help progress a once endangered species and cut down on the amount of pigeon crap on your truck in the parking lot.