Spring fishing season is officially over. Which isn’t great news for me. The spawn for walleye, crappie, bass and pike really kicked off my season in style. Here’s the details on one afternoon spent wearing-out some big crappies. We were shore-fishing in the Upper Straits of Orchard Lake in Metro Detroit.

A string of  3 or 4 unseasonably warm days in mid-April fired up the crappie. They quickly populated some shallow flats next to a marina down the street from my buddy’s house. They were holed up in the boat slips in approx. 6-8 fow. And attacked minnows suspended under a bobber for about two hours before sunset.

We used lightweight spinning gear which made for some awesome fights with the larger crappies and a couple bonus largemouths. I had more successful hook-sets with a very small treble hung about 12″-15″ under the bobber which allowed the minnow to swim freely. Hooking the minnow on a single hook of the treble underneath its dorsal fin kept it alive and kicking for quite awhile. One trick I learned on this outing is to slowly pull the bobber through the water. Slowly draw the rod-tip straight up (almost like retrieving a jig or rubber worm but very, very slowly) to give the bobber a slight side-to-side wobble. The added motion drove the bigger fish crazy. Also, make sure to keep an eye on your bobber. Many crappie slowly sneak off with a minnow. If it seems like the bobber is drifting even slightly in any direction set the hook.

Much of the Upper Straits of Orchard Lake is private shoreline. We were asked by quite a few (less than friendly) people to verify that we were fishing with a resident of that neighborhood. They know they have good fishing and plan to keep it that way by keeping pressure to a minimum. I understand where they’re coming from. If everyone knew how good those fillets were (coated with instant mashed potato flakes and pan-fried….so good) that lake could get fished out in a hurry. 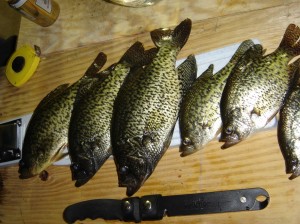 Now that summer is here these fish (and most of the fish in Michigan) have retreated to much deeper colder holes. I’ve caught crappie in the summer by slow trolling small spinnerbaits like beetle-spins in deeper water. But I prefer watching that bobber for a few hours as the sun goes down on a cool spring evening. This 90 degree crap is getting old already. September can’t get here fast enough.