A Legend is Born

John has become a legend at Lost Lake Woods Club. His heroic battle with a 7lb walleye on Badger Lake was amazing to witness. Watching him transcend from amateur angler to superstar is, admittedly, hilarious.

Lost Lake Woods Club (LLWC) is a club for families, golfers and sportsmen located just outside of Alpena, MI. I’ve been fishing and hunting here since my father joined the club in the early 1980’s. About 10 years ago John graced the club with his presence for the first time at the annual Trout Derby in February. At the time, nobody knew we were standing in the shadow of a giant.

John didn’t grow up around anglers. But he’s making up for lost time. Fishing with friends and family he has increased his skill level and progressed his techniques at a rapid pace. The dynamic between us in the fishing boat is very unique and predictable. I’m the guide. John catches the big fish. He usually out-fishes me on what I consider my home turf. I could never expect that in my little 10-foot row-boat his game would reach this level.

That faithful Saturday morning of Memorial Weekend we were trolling the “trough” with the famous “badger lake assassin” — a green storm thunderstick. We hadn’t even finished the first pass when John locked into this giant walleye. I snapped the photo of John holding up his prize. Weeks later this photo was printed on the cover of the LLWC newsletter. A legend was born.

“This couldn’t have happened to a better person” said Jim Thrubis while fishing the same lake which created this fantastic story. “We’ll be hearing about this fish for years.”

And rightfully so. This image has created quite a buzz around LLWC.

I’ve spent the last few days at LLWC with family. Launching the boat on Friday night a man with a Brittney spaniel approached my truck. The conversation:

Man: “I’ve heard there are some huge walleye in this lake. Did you see that picture on the cover of the newsletter?”

Me: “I haven’t seen it yet. But I know the guy who caught that fish.”

I shared the story, gave him some tips and sent him on his way. I’ve experienced this same conversation at least 3 more times in the last 4 days. Pretty soon John will be holding “how to catch walleye classes” in the Adult Lounge in the basement. Admission will be one grape shrub or turtle sundae.

But not everybody is a believer. In a quick conversation with the club manager I learned that at least one person has stated “there is no way that fish came out of Badger Lake”. I’m sure people doubted Paul Bunyan’s amazing lumberjack skills years ago in these surrounding forests. But he proved his worth and became larger than life. He is now commemorated by an amazing statue in Ossieneke. I’m sure this is the first giant fish of many for John. But the foundation for his own statue has been poured. It’s now John’s mission to sustain his greatness.

I love this story. And I admire my buddy. But there is just something eerie about walking into the lodge, which I have stayed in countless days and nights in my childhood, only to be greeted by a wall of a familiar smiling face. 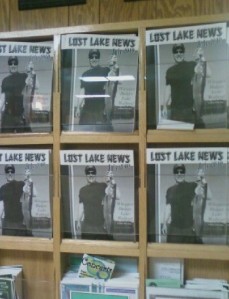 That’s what this club is about. Traditions. Enjoying the outdoors. And making memories with family and friends. I hope you enjoyed this 4th of July weekend. I’ll remember this one for years.

One thought on “A Legend is Born”