Opening morning of Duck Season is the single most anticipated event of my year. I’ve hunted with the same core group of guys, at the same spot, since I was 13 years-old. Every year the walk through the aspen tickets, in total darkness, brings back a flurry of memories. Dropping teal and wood ducks with my brother. Hiding in the aspens watching my Dad crush geese at 50+ yards. Laughing at the stories of friends and dogs who can only be with us in spirit. It’s a good thing duck hunting has so much to offer the soul. Because the only ducks we dropped that morning happened in distant memories.

Ok. That was a little dramatic. But I’m disappointed. Out of 5 hunters we ended up with this lonely hen wood duck. Usually opening morning in the Middle Zone includes some great shots a decoying mallards, black ducks and teal. This year the number of new birds seemed limited leaving smarter, local birds to contend with. Maybe the cold weather in the week leading up to the opener pushed some of the younger ducks out of the area. I’ll never know for sure. The good news for hunters near Alpena is that there are birds in the area. The bad news is they’re not falling for our usual tricks. 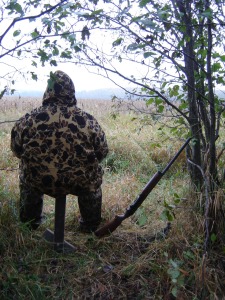 So that leaves us with two options to get ducks: experimenting and working harder. Determined not to get skunked on the opener I left the group with a confident statement “I’ll see you boys in an hour with a duck”. I noticed a spot where the birds were funneling out of the marsh. It was about a 1/2 mile round trip in neck-tall brush and knee deep mud. The hike resulted in our only duck of the morning. And some pretty awesome shots of a rainbow over the marsh. 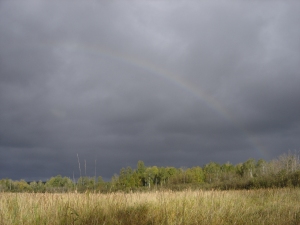 If the birds won’t do what you want them to then you must adapt to what they’re doing. That can mean a lot of extra work. But it makes harvesting birds that much more rewarding. Just remember to bring a boot dryer to zap the sweat out of your waders.

The next morning we experimented. We tried three different locations in short hunts, one-two hours each, to pinpoint an effective strategy. The result was more shooting. We started by pass-shooting birds heading into the marsh to feed from roosting spots until about 7:45. Then we hiked into another spot where we saw birds working the previous day. We hunkered down in some tall grass, turned on the mojo and commenced to miss a few shots. But at least our run-and-gun approach worked. 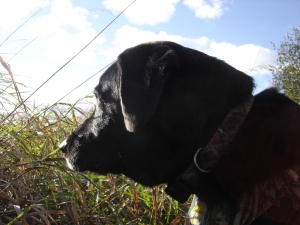 Zeus enjoyed a mid-morning moment in the sun between sporadic rain showers and flights of geese which poured into the marsh to feed on wild rice. The birds worked the area until about 11 am.

Dad didn’t need any break in the weather to enjoy his traditional cigar in the duck blind. It’s good to know there are some  things I can always count on.

Our third attempt was jump shooting. Instead of flushing birds off the water then shooting at them we spooked them then took cover. Within 5 minutes a group of 3 teal came ripping through the treetops looking to land back in the pond. Dad connected on this green wing saving us from getting shut-out on our second day of the season.

Another note-worthy experiment of the weekend was a the new Hypersonic Steel shot from Remington. The advertised speed, 1700 fps, really increased my range. I hit ducks at longer distances, with a shorter lead, all weekend. But I couldn’t make a clean kill. That steel travels so fast that it blasts right through the ducks leaving cripples to do a death glide and bleed out in the marsh. If you’re a great shot and consistently hit birds in the head, these shells could really increase your effective range. For an average shot like myself I’ll sacrifice some speed for more stopping power. I’ll keep my Kent FastSteels in the blind this season. (I’m in no way sponsored or endorsed by Remington. I bought the shells to try them out and report here on the blog in case you were interested in trying them.)

Despite a low bird count this past weekend was still a success. I learned some tricks, took some pictures to commemorate the event and perpetuated our annual tradition for one more year. Besides it’s easy to be optimistic. This upcoming Saturday is opening morning in the South Zone in Michigan. See you boys in Lake St. Clair. Gotta love a Michigan Mulligan.