My duck season is officially off to a rough start.  After a lousy opening morning in the middle zone, I was pumped to get a second chance in Lake St. Clair. But  (and I don’t really need to be reminded) duck hunting doesn’t always happen like I plan. Regardless, my alarm rang at 1:45 am last Saturday morning marking the start of another season in the South Zone. Zeus, the boys and I got to the Snooks Highway boat launch on Harsen’s Island at 3:45 am. And we almost didn’t get a parking spot.

Muscamoot bay was packed with hunters. I had scouted the area during the youth hunt and marked a few promising spots on my GPS. Each waypoint was surrounded by the time we got there. We motored around the bay until we found some open water and set out about 70 decoys. Large flocks of divers and mallards are in the area so I figured we could draw them in with a bigger spread.

As soon as shooting time hit, the refuge at Harsen’s erupted in gunfire. I could hear the wind whistling through the birds wings as flock after flock fled for safer waters. Within the first ten minutes a pair of mallards circled the decoys. Mike and Geno dropped the drake like a stone into the right-side of the spread. I was convinced that this hunt was going to be a good one.

The morning progressed and the shooting near the refuge stayed at a steady pace. The birds filtered out of the corn and poured into the bay. They just weren’t interested in landing near me. I watched, frustrated, as hundreds of birds flew a mile high flaring at every distant gunshot. Zeus toughed-out the cold water just waiting for his chance to spring into action. 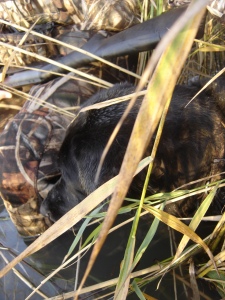 One adjustment I made to the boat to prep it for this hunt was the addition of cedar branches to add some dimension and color to the blind. Mike trimmed some cedar shrubs in his yard filling two contractor sized garbage bags. Using about 100 zip-ties I added these branches on top of the fastgrass mats to match the green early season cover. This method did the trick on a big old redhead drake. Feet down and staring at the boat, he was ready to land in the decoys with no idea we were there. Unfortunately I was drinking coffee instead of paying attention and never got a shot off. Despite the cloud of steel the boys sent in his direction, the old drake flew off without a feather out of place. 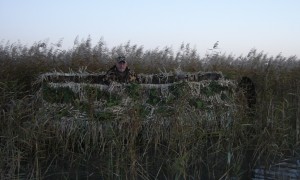 The weather was beautiful, for fishing, so we only stuck it out until about 10 am. Before we left Geno made an awesome shot on the second, and last duck of the morning. This hunt didn’t go as I planned. But it was great to get out in the big bay, share a few cigars with some of my favorite hunting buddies and put the boat to work. 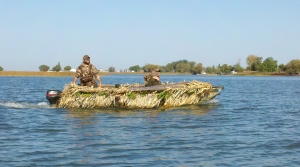 If you’re going to try to hunt this area in a similar rig, be prepared to hop out and push. Little Muscamoot is almost entirely too shallow to run my 16 foot boat even with a short shaft motor.

The next afternoon we headed out to the South River Rd boat launch to try again. The thermometer read 80 when we hopped in the truck. I can’t say I’ve ever hunted ducks in shorts and a t-shirt. Until last Sunday. 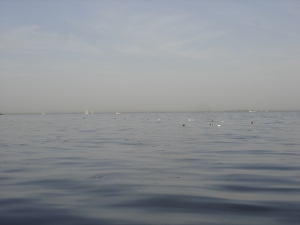 We put out a long string of about 20 diver decoys including buffies, readheads and bluebills. At the end of the line we left a space for the birds to the land. We set mallard decoys to create a few more pods resembling family groups around the landing zone. With the sun to our backs I hoped to blind the birds to the boat as they were coming into the spread. The local mallards were pretty skittish of the rig. But one bluebill came ripping through the blocks successfully dodging a few shells as he headed toward Metro Beach.

From sunrise on opening morning in Muscamoot Bay….. 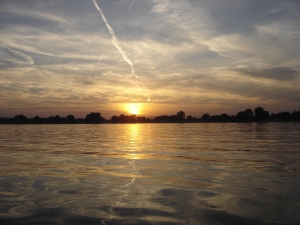 to sunset over the bay at South River road, I tried like hell to get a few ducks opening weekend. It’s painfully obvious that I don’t have limits of birds to show for all of the work.  But you really can’t beat the adventure of setting out to convince a few flocks to fly within range of your favorite shotgun.

Persistence pays off in duck hunting. So it looks like I’m going to have a long haul over the next 60 days. I couldn’t be happier.