Never Give Up On The Boy

It’s safe to say the signs of my addiction started at an early age. According to Thrubis legend the first word I uttered as a child was “bird”. My second was “dog”. My priorities have been definite ever since. While the other kids doodled cars and scrawled their names repeatedly in the margins of their school books, I sketched Black Labs fetching dead birds. I can’t remember a time I haven’t been distracted by thoughts of bird hunting. I’m sure you understand this feeling. Otherwise you probably would have never found a website with the words HUNT DUCKS in the url.

One of the sweetest aspects of the addiction is my fascination with hunting dogs. I studied them as a kid. I know the difference between a Vizsla and a Weimaraner. I’ve shocked people by actually knowing their Portuguese Waterdog was not a Poodle. Because I bleed bird hunting it’s easy for me to be inspired by the dogs who love the sport even more than I do. 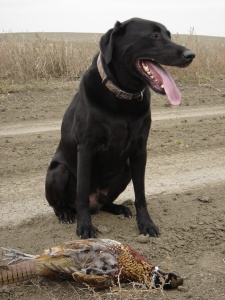 I feel a kinship with their enthusiasm to find game. Their excitement is familiar because we feel the same way when the truck hits a dirt road heading to grousey-looking cover. I know the anticipation in their whine while I fill the boat up with decoys in the dark. The same emotions made me pester my dad and his buddies with questions about shells, wind direction and chokes when I was a kid. Their drive to get birds sometimes makes them act irrational and out of character. To this day, I still get way too excited when ducks are cupped and landing in the spread. I’ve been known to suddenly get bossy and bark orders with birds in the air.

Of all of the breeds on the planet that share my drive and passion, there is only one favorite. The Black Labrador Retriever. Sleek, powerful, mellow, loyal, hardworking and gifted with the natural ability to find birds could describe many great breeds. It’s the Lab’s personality and versatility that sets them apart in my world.

Maybe I see similar traits in a black lab that I see in myself. Fun-loving. Friendly. Ready for any outdoor adventure from the Dakotas to the Great Lakes. Whatever the reason these dogs resonate with my outlook on life and one, in particular, is my best hunting buddy named Zeus. 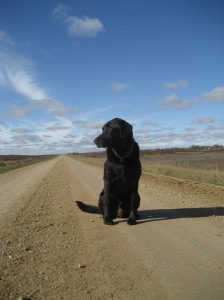 For the last 8 years I have had the pleasure of hunting with my boy. The “Gentleman Hunter” is polite, funny, obedient, tough and simply exists to hunt. We have worked together enough, in training and hunting, to become a great team. We read the others idiosyncrasies to accomplish our goal of finding birds. I’m often shocked at what this dog can do but the humility that neither of us are perfect makes our team grounded and focused. 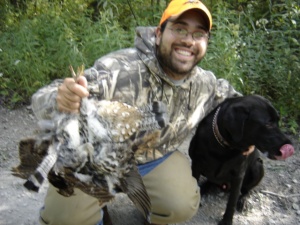 This weekend we were hunting in my boat along a little peninsula on an inland lake near Brighton, MI. A hen mallard landed short of the spread by about 100 yards and started calling at the top of her lungs. We all froze when the drake she was talking to appeared behind us. He flew directly overhead and flared straight up when we stood to shoot. The shot broke his wing, brought him down and made him skip 25 yards when he hit the water. Stunned for a moment, he sat there motionless. I sent the boy into the 40 degree water on what was every part of an 80 yard retrieve.

Zeus closed half of the distance before that bird got up and tried to fly away. He lost track of the bird as that cold water zapped his strength. We pulled the anchors and motored out to give him some help. We hauled him into the boat and headed to the shoreline in pursuit of the drake.

Zeus jumped back out the boat to work a 100 yard chunk of thick muddy cover. He was birdy the entire time. His tail, like a trailing weed-wacker, widened his walking paths as he cruised back and forth with his nose to the ground.  When it looked like he lost the trail, I called him back to the boat. We slowly motored back and forth along the shore looking for any sign of that bird. But we saw nothing.

We were headed back to the decoys when I was struck with determination. Zeus has worked hard enough. The boy deserved to find this bird. I parked the boat on the shore 150 yards from where we last saw the duck. Zeus was birdy when his paws hit the mud. This time, I followed him into the brush as an added vote of confidence. Thorns tore the back of my hands open but he was adamant so kept pushing. His telltale snort was music to my ears. Zeus makes a sound like a pig looking for truffles when he’s near a dead bird. I could see the cattails swaying in a circle. He was closing in. I kept pushing into the brush in his direction until I fell into a little creek. Suddenly his snorts became muffled. He had feathers in his mouth. He found it. I half expected it. But I couldn’t believe it.

That cripled duck found a little creek and swam 75 yards into the thickest, nastiest cover I’ve seen all season. We looked for the drake for almost 45 mins giving the scent trail time to diminish. The wind was to our backs the entire time giving Zeus no help to scent the air. The odds of finding this bird were small. But Zeus doesn’t give a shit about odds. 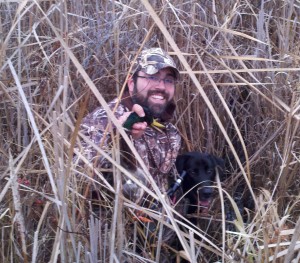 When we got back to the boat my brother and my buddy we’re pouring the praise on Zeus. He deserved all of it. Dusty asked me how I knew that duck was still there. The truth is I didn’t know. But Zeus did. And I wasn’t about to give up on his instincts. I nonchalantly stated “I never give up on my boy” and hopped up in the boat. Like we meant to do that all along.

Maybe it seems like I’m bragging about my bird dog. Well….you’re damn right. He’s not always perfect but when he’s good, he is a spectacle. It seems to me that we are so concerned with what’s going to happen in the future, the next hunt, our next promotion, our next truck, that we forget to enjoy what we’ve got when it’s right in front of our faces. One day, I’ll have to write the obituary for my furry friend. Why not celebrate his life while I can still enjoy it?

This post is dedicated in memory of DMZ. You are one in a million. You’ll be missed.

One thought on “Never Give Up On The Boy”