Bluegill. Nothing about them seems all that sexy. They’re not mean like pike. Or tricky like walleye. They’re the fish you caught at the end of a boat dock. When you were 4.

I can’t explain why a fish I ignore 10 months a year suddenly becomes an obsession. When the lakes in Michigan freeze up, Monster Gills haunt me. 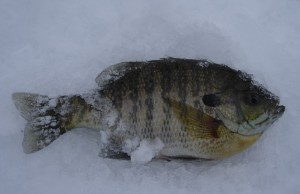 Maybe it’s because my buddy lives in a neighborhood with a private lake. Which is stacked with hybrid gills. Only a couple times each season we hit a drop-off at sundown and slam monsters. We’ve had over 10 fish pushing the Master Angler status in the past two years. I should rephrase that earlier statement. The Monster Gills in that lake haunt me.

My buddy Dirty (artist in the median of Bacon Log) invited me to his place for a Superbowl party. The plan was to fish the Gill bite, fry up a bunch of food from smelt to pizza rolls to twinkies then watch the Pack and the Steelers. Sounds like heaven to this mid-western homeboy. 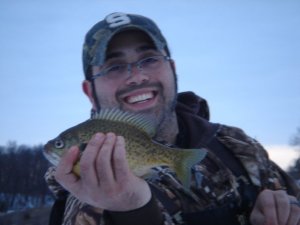 The fishing started slow. Dustin picked up one keeper within the first ten minutes then they shut down for a while. The Vexilar’s showed fish but they had momentary lockjaw.

We drilled 10-12 holes over 30 fow and I moved between them until I found some fish on the flasher. They were holding tight to the bottom. With a little jigging Dustin started hauling them in. He iced about 6 keepers before I finally connected on a nice 9+ inch Bluegill. With a shot of confidence from landing my first keeper of the season from the secret lake I moved to another hole.

The Vex showed a big red line suspending 4 feet over the bottom. My teardrop jig seemed to take forever to sink down to his level. He rose to the bait. I set the hook. He pulled drag.

I thought it was a bass. Until I saw him. I scooped him out onto the ice with my hand. I couldn’t believe it. The elusive 10″ gill officially iced. I haven’t caught a lot. But this is an official bull-gill. 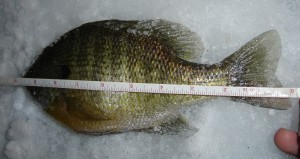 Dustin tells me that it’s a master angler. I’ll send the pics into the MI DNR and see what they say. 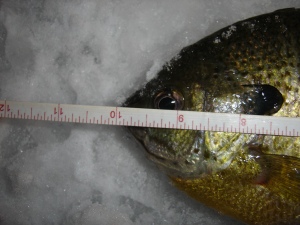 I have room on my bibs for a new patch.

« Icing Crappie and an Easy Recipe
Trout on Ice »

One thought on “Monster Gills on Ice”