I could have sworn when I set the alarm last night that is was March. You know, March. The month that holds the official first day spring? When the alarm went off at 5:30 am, the report on the Weather Channel looked more like January. 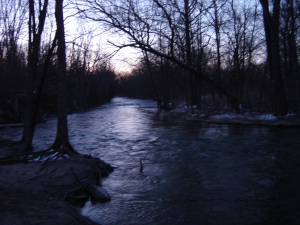 The River to Myself

15 degrees. 1….5….degrees. I almost went back to bed. In hindsight, I should have. Instead, I suited up in my ice fishing gear, tossed Zeus in the truck and we headed back to Yates in the bone-chilling darkness.

There were 5 or 6 trucks in the parking lot when I pulled in around 6:30. Most of the guys were fishing from shore but a few brave men were wading. I headed across the street to my favorite spot near the wooden steps behind the Cider Mill.

Bootprints almost looked like fossils in the frozen mud. A mocking reminder that just a few days ago the ground was thawed and prepared for spring. The river was higher than last week creating a couple of new eddies in which I envisioned where teeming with suckers and maybe even a walleye.

Slowly the sun brought some life to the silent landscape. Ducks and geese got up from the roost flying up and down the river looking for food. Zeus was tormented by the sight. He was constantly staring at me like “Shoot. Shoot. They’re right there. What’s wrong with you?” Sorry bud. I would have welcomed the excitement. 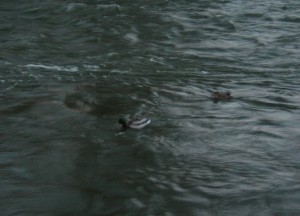 I stuck around for a little over two hours. Most of that time I had the river all to myself. It was almost like I was up north. A snow laden shore on a desolate stretch of river. Nothing but the sound of birds and running river. Until the light in the nearby intersection turned green and the familiar rumble of city traffic brought me back to reality.

Zeus and I got skunked. But I guess it beats sitting on the couch wondering if I could’ve caught a fish today. I’ll sleep easier this afternoon knowing that I tried. 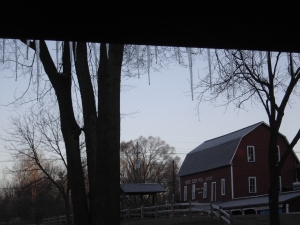 « And So It Begins
Crappie Dusting »