Amy and I stood on the dock while Jake got the boat ready. It was her first walleye fishing trip on the Detroit River. I was excited to try out my new Carbonlite rod from Bass Pro Shops so I put on a quick demonstration on the basics of vertical jigging. I lowered a 1 oz jig into the cloudy water. I snapped the rod tip up and felt the slightest pressure. I curiously set the hook. The drag popped then screamed. The water boiled in the center of the canal as a big old carp surfaced briefly then dove deep to shake the hook. Captain Jake arrived a few minutes later and scooped-up that big goldfish with the net. Carbonlite 1. Fish 0. A great first impression.

The river run wallys are long gone but the Carbonlite is still getting a workout. I bought it specifically for jig fishing but it’s so versatile that I can’t leave home without it. From popping a jig through weeds, to ripping flukes through lillypads to finesse fishing soft plastics this rod does it all. And does it well. 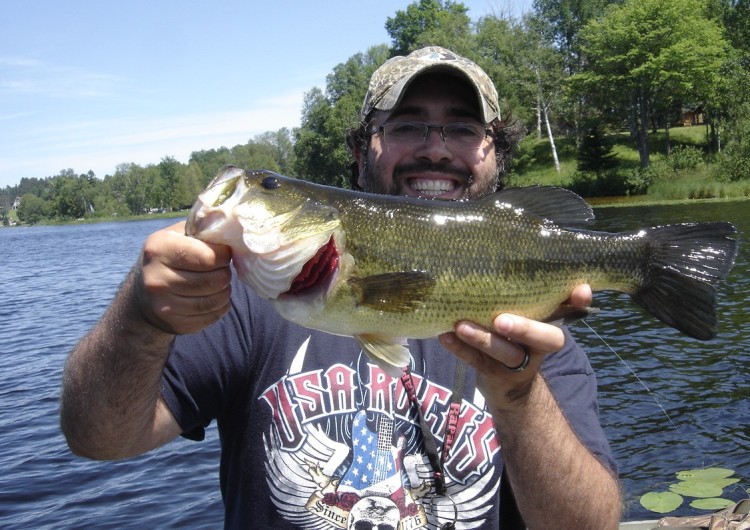 Wacky Rigging with the Carbonlite 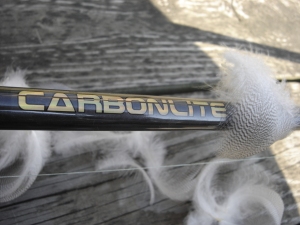 1. It’s a featherweight. The Carbonlite makes my light action baitcasting rod feel like a benchpress bar. I can cast it all day or vertical jig for hours without getting sore. 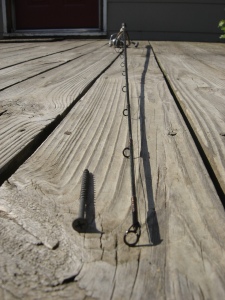 2. It’s really, really sensitive. I can feel every rock, weed and log the lure bumps. The carbonfiber blank tapers to a really fine point. It telegraphs strikes so well that I needed to revise my hook-set approach. More on that in a second. 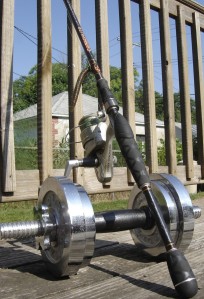 3. It’s damn strong. For it’s weight and sensitivity this rod has one hell of a backbone. The hooksets are lightning quick and I dare a big old bass to bulldog me down in the weeds.  This rod can winch his ass out of there.

Bonus feature: It slings line. From finesse worms to crankbaits the Carbonlite launches lures. The guides are sturdy, fluid and built to optimize casting distance.

The biggest drawbacks are the price and my inexperience with high-quality rods. This rod set me back $120. It’s a good value but I’ve never spent more than $50 on a spinning rod. Using it a few times made the sticker shock seem silly. At first I was frustrated using that rod. Feeling every single tug and bump had me flailing around setting the hook into anything within 5 feet of the bait. Once I slowed down my approach and let the fish take the bait for a second my hookset ratio increased.

I strung the new rod with the latest braided line from Sufix. I wanted a line with no stretch and no memory but was reluctant to try braid because I’ve heard it doesn’t cast well.

The ads for Sufix 832 said it’s one of the best casting braided lines on the market so I gave it shot. The first few casts weren’t all that impressive but each cast kept getting farther. Out of the box this line has some kind of stickiness to it. It eventually washed off.

My first spool of braid

With no stretch this line telegraphs strikes better than mono and flouro. The hooksets are solid and fast. The line accentuates the best features of the Carbonlite rod and has completely changed my feel for fishing. Before the lovefest gets out of control, I do have a few gripes. 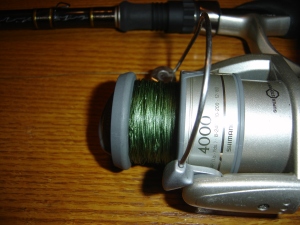 Gripe #1: It’s expensive. I paid $25 for 150 yards of line that didn’t even come close to filling the spool on my Shimano Sedona 4000. I fixed it by adding about 100 yards of flouro as backing. I tied the lines together with this knot I found on YouTube.

Gripe #2: It’s weak. I thought braid was supposed to tough and abrasion resistant. I’ve broken off one decent Bass and a bunch of good sized Northern Pike. Once I dialed down my drag and stopped setting the hook really hard I’ve lost fewer fish. I also tied a 20 lb mono leader which gives the fish a little bit of stretch to play with.

Grip #3: It’s knotty. Just about every trip ends with wind knots that need to be cut-out and re-tied.

To be fair I think using a heavier test on this line would probably fix these problems. Right now I’m using the 10lb test which is the equivalent diameter of 4lb mono.

Taking everything into account I give both of these products a high rating. On a scale of 1-10 I’d give that Carbonlite rod a 10 and the Sufix 832 an 8.5. Hopefully they get back to work this weekend.

PS: I was not rewarded in any fashion from Bass Pro Shops, Sufix or Rapala to write this review. I purchased the rod and the line at the Metro-Detroit Bass Pro Shops store where many of my paychecks go to die. This is just the honest opinion of an outdoor gear junkie. I hope you find it useful.