I stepped out of the truck into the teeth of a 40 mph southwest wind. Camo was everywhere. Hundreds of hunters stood in line to try their luck at Harsen’s Island “duck bingo”. Out of 91 parties we were #89 on the list. We scrambled out of the parking lot to beat the crowds to the bay.

The waves weren’t bad until we cut out of Little Muscamoot and motored toward the big water. The front of the boat caught hell as Lake St. Clair invited herself aboard. Rain drops pelted my face like gravel thrown from the back tires of a truck. The boat, and my clothes, were taking on water. We got to the spot but some dudes were already there. A string of f-bombs. We spun around, put the wind to our backs and surfed the boat back to calmer waters.

Two pods of mallards, two geese and a long string of diver decoys bobbed up and down in the waves waiting for shooting time to start. I sat there cold and frustrated. Rain dripping from my hat. It’s been an awesome season so far and I had a feeling that this morning was going to be less than stellar. That’s duck hunting.

Guys on the other side of the bay started dropping birds. I couldn’t hear most of the shots over the wind. We watched the show as ducks were silently plucked from passing flocks. Our guns waiting their turns.

Coffee time. We abandoned our posts in the cane reeds and hung out behind the boat. Uncle Mike’s “duck blind mocha” was breaking the chill when he called the shot. A flock of redheads, at least 30 birds, crossed from left to right. Some with wings set. Others not so convinced. We went for our guns but it was too late. They flew with the wind and were gone in the matter of seconds. They left one of their buddies sitting in the decoys. Our only duck of the morning.

Mike and Geno headed home but Dusty and I had a score to settle with that damn duck bingo. This time we hit it. With a ticket to a flooded corn field in the truck we stopped to grab lunch and watched the first half of the Spartans handing our rivals, the Wolverines, their first lost of the season. This day was getting better.

Flocks of black ducks, pintail and mallards looked interested in our set-up but the strong wind kept them at a distance. I petted Zeus and kept shifting my feet in the thick black mud to keep them from getting stuck. When the sun started to set the wind finally dialed it back. It was game-time.

We connected on a pair of pintails. First of the season. Then a flock of mallards passed overhead. Dusty dropped a mature greenhead. Mine was still getting his color but couldn’t escape one of the longest shots of my life. That helicopter spin to the water is something I’ll never forget.

Hundreds of birds piled into the fields as we packed up the decoys. I counted 100 birds in less than a minute. They. Where. Everywhere.

When my wife got home from her business trip at 11:30 I was standing in the driveway cleaning birds. Seven hours later Dusty and I were setting goose decoys and brushing up the layout blinds. No rest for the addicted.

At day break we put a few wood ducks down. Then we ran back to the goose field. At least 50 geese were eating soybeans right in our decoy spread. We stalked over the hill but couldn’t hide the big group of hunters. The geese spooked and took off. Nick’s first shot punched nothing but air. The second and third brought down 4. I never seen anything like it.

We hunkered down in the blinds, some of the guys just laying in the field on their backs. After a few flocks landing right on our laps we had our limit.

The hot streak survives another weekend.

Eyes to the skies

View from the blind 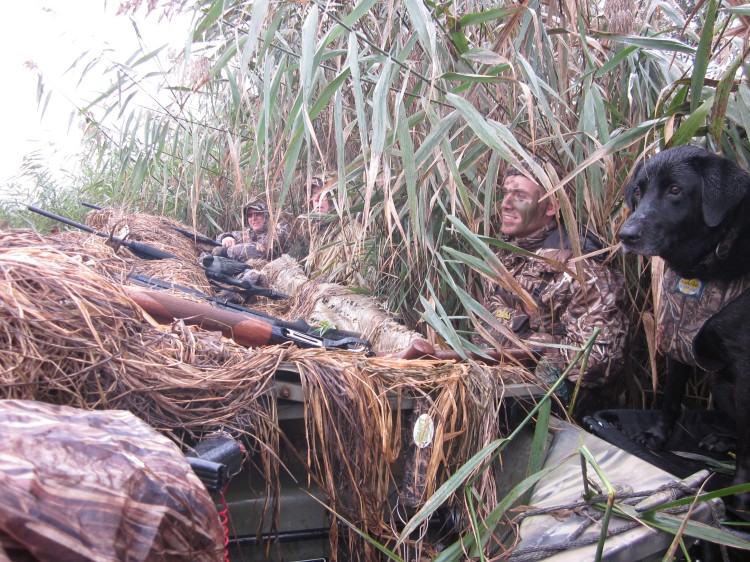 Hiding in the Corn

He caught it. Bare handed. I shit you not.