NoDak 2011: A Suicide Mission and a Dead Battery

The walk back was brutal. A long mile through sticky mud and knee-deep water. The sun disappeared in an instant. Zeus shivered while he walked. I pushed on. Sweat dripping. F-bomb dropping. Trying to step in Dusty’s footprints before the mud swallowed up any evidence that we were dumb enough to test this huge pothole.

From the road it looked perfect. Pockets of tall reeds for cover. Water shallow enough to wade. Birds everywhere. Besides, it was our only choice. The morning was wasted with a dead truck battery. The afternoon spent scouting. Only a few hours of shooting light remained of our first day in North Dakota. And we drove way to damn far to watch the sun set without knocking down a few ducks.

The dogs began paddling after a few hundred yards. Then the decoys on my back started floating. We  clung to the weeds to get traction as the water came close to the top of my waders. We found some higher ground, I set the mojo and flipped the switch. Before I could get the decoy bag open they started locking up. I threw a shell in the gun, swung over my head and dropped a drake mallard. Another shell. Another shot. A pintail floated on it’s back waiting his turn for a swim with Zeus.

The water was bone chilling. I could feel the chill on my legs through my waders and two layers. Zeus wasn’t going to last long standing in the water but the dog stands were a mile away in the truck. Dusty and his pup, Tugboat, took one for the team and hiked back. I set a few decoys then joined Zeus on the shore and waited for our pals to return.

With the stands set I could hear Tug’s teeth chattering. I wasn’t too far off myself. My sweat was starting to freeze. My hands burned.

Dusty rolled a nice drake pintail. It hit the water. Head up. Eyes locked on the dogs. Zeus started the chase. The duck dove. The pup followed. The pinnie popped up again and the dogs closed the distance. He dove. Zeus kept swimming but the pup held back. Then disappeared under the water.

For a second I thought the little guy was in trouble. Then the duck broke the surface. Followed by one yellow paw. Then the next. Then his furry little head. He pulled the submarine maneuver on his first North Dakota duck. Check that. On his first ever water retrieve. Impressive.

Another pair of pintails and a bluebill joined their cousins on the floating decoy bags before shooting time officially closed. All in all, it was really a great hunt. At least that’s what I kept telling myself on the brutal walk back to the truck. 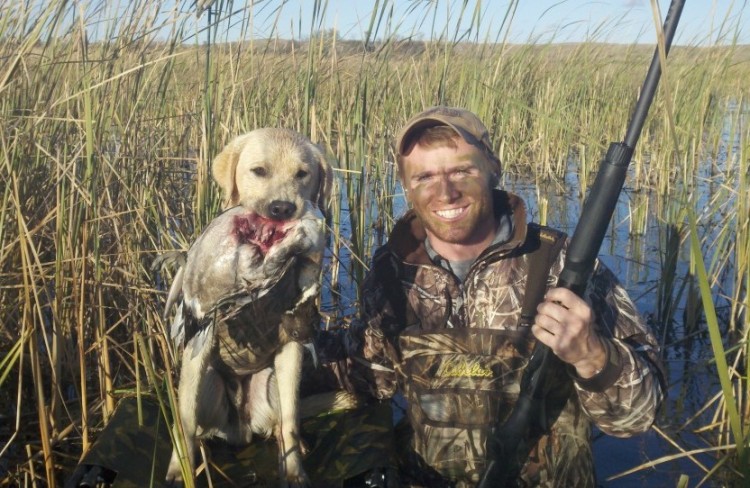